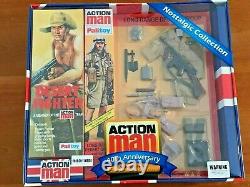 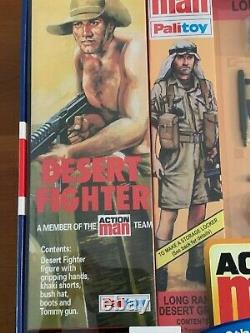 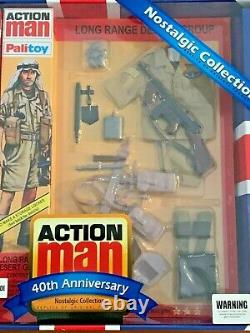 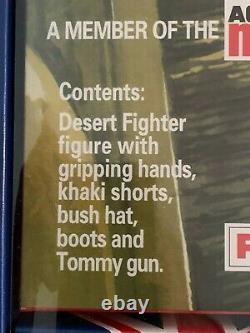 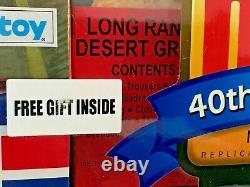 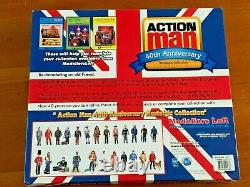 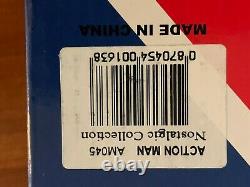 Submitted for your approval is an. Action Figure Set #45 - Wave 10.

Action Man was an action figure line launched in Britain in 1966 by Palitoy. As a licensed copy of Hasbro US 1964. American "movable fighting man", G. Reproduced the majority of the Action Man figure and uniform range virtually identically in appearance to those of the 1966-84 period. Action man took the 12 action figure to new heights.

Not only did Palitoy produce uniforms based on the US line, but they created a wide range of uniform sets for the UK market. British military formed a large part of this range, with ceremonial outfits being among the most spectacular. From a collectors standpoint, they are very desirable. Many outfits were available as complete boxed figure sets. There were six "soldiers of the century", which matched Hasbro's six "soldiers of the world", with the exception of the Japanese outfit and figure, which was never offered in the Palitoy range. These sets included an "intelligence manual" that covered all the available offerings in the lineup, and pages on light and heavy weapons, officer. As with GI Joe's 40th anniversary releases, the sets were released in "waves" of 4, with 14 waves issued. The various waves are interspersed with figures of all the 60s-70s variants; painted head/hard hand, flocked hair/hard hand, and flocked hair/flex hands. Whilst the vast majority of 1960s and 1970s Action Man were released for the 40th Anniversary in 2006, one of the rarer uniforms, the British Escape From Colditz Officer was never released in its own packaging. Instead, it appeared inside the superb Escape From Colditz Boxed set.

The driving force behind the development of this line, the "Nostalgic Collection", was Alan Hall, the writer of three Action Man collector's guides. A wide range of figures and outfit sets were produced in a format identical to the original, the packaging in a manner similar to Hasbro's G. The figure is a faithful reproduction of the original, with the exception of the feet, which are the larger GI Joe variety. The body is held together in the same manner as the original, with rivets, wire hooks and elastic, with the precise details slightly varied.

Items, down to the feel of the fabric used and the vinyl/plastics of most components; the boots are a flexible vinyl, in comparison with the hard plastic used for the GI Joe 40th reproduction boots. This is another one of my personal favorite Action Man /GI Joe uniforms (think Rat Patrol). It is issue #45 of the Action man 40th Anniversary line, the Long Range Desert Group (LRDG) uniform set, and it comes with an Action Man boxed Desert Fighter 12 figure. The figure should be a blonde, flocked hair figure with gripping hands, but I can not confirm this, since I have never actually opened the set. I remember walking into the International GI Joe Collectors Convention held on the USS Intrepid back in 1993 and seeing the Cotswold Collectibles dealer table.

I was taken aback by GI Joe's British cousin, Action Man, and was amazed at what Palitoy had done with our 12 hero. The selection of colorful, detailed, well made dressed figures was overwhelming and I have been a fan of Action Man ever since. When they started issuing the 40th anniversary sets, I was in Joe heaven, and I did my best to keep up with all the issued sets as they were being released in waves. As my wife always tells me, You can't take it with you! It is brand new, never been opened. Due to the relatively small numbers made compared with the original sets, and the nostalgic graphics that appear on the boxes, these have held, and in many cases, increased their value. The item "Palitoy Action / Man Hasbro GI Joe 12 40TH 1966-2006 12 Long Range Desert NEW" is in sale since Saturday, February 20, 2021. This item is in the category "Toys & Hobbies\Action Figures\Military & Adventure". The seller is "iwantjoe" and is located in Staten Island, New York. This item can be shipped to United States, Canada, United Kingdom, Mexico, Germany, Brazil, France, Denmark, Romania, Slovakia, Bulgaria, Czech republic, Finland, Hungary, Latvia, Lithuania, Malta, Estonia, Greece, Portugal, Cyprus, Slovenia, Sweden, Belgium, Ireland, Netherlands, Poland, Spain, Italy, Austria, Bahamas, Switzerland, Norway, Ukraine, Croatia, Chile, Colombia, Costa rica, Panama, Trinidad and tobago, Guatemala, Honduras, Jamaica, Antigua and barbuda, Aruba, Belize, Dominica, Grenada, Saint kitts and nevis, Saint lucia, Montserrat, Turks and caicos islands, Barbados, Bermuda, Bolivia, Ecuador, French guiana, Guernsey, Gibraltar, Guadeloupe, Iceland, Jersey, Cayman islands, Liechtenstein, Luxembourg, Monaco, Martinique, Nicaragua, Peru, Paraguay, Uruguay.